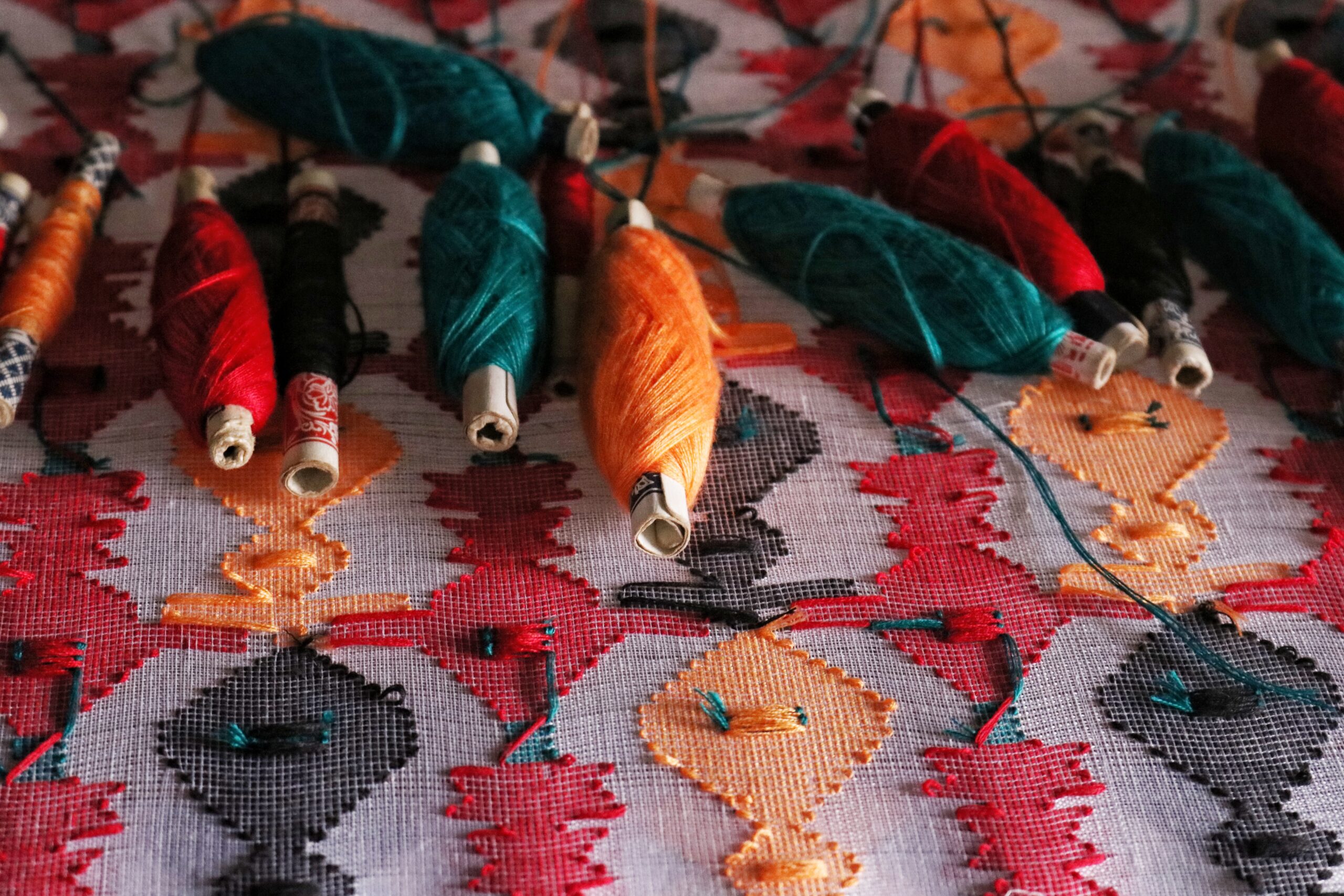 Nepal is a nation with rich history, culture, and nature. From geography to the number of religions and languages, Nepal is seen by the world as a unique destination to travel. Nepal is also known as the country of the Himalayas and the land of Buddha. But, have you ever wondered about the depth of Nepal that is beyond mountains and Buddha that are god-given? Then, I turn myself to one particular textile Dhaka.

The origin of Dhaka is quite debatable. It is believed that Dhaka cloth was introduced by Dambar Kumari, a daughter of Junga Bahadur Rana. When she used to live in Varanasi in India, she became very fond of the cloth as it was colorful and soft. After she came to Nepal, Dhaka cloth became fashionable apparel, especially among women. It is also believed that Dhaka got its name from the capital of Bangladesh- Dhaka, as the weaving techniques were imported from there. Either way, we do have to agree that Dhaka should be known as the Fabric of Nepal.

After introduction of the cloth, Dhaka topis started to become an essential part of our nationality. Not only that, the cloth was worn as daily wear; daura suruwal by men and chaudandi cholo by women. As the cloth is made from pure cotton with different patterns and designs, it was fashionable, and suitable for both summer and winter seasons. Soon, the popularity of Dhaka was not limited to Terhathum, Dang, Palpa, etc. but also urban cities like Kathmandu and Lalitpur. To make Dhaka official and a symbol, King Mahendra made it compulsory for all men to wear Dhaka topis for official photographs used for documents like citizenship.

In 1960–1990 A.D., the textile industry of Nepal was considered to have the largest potential. There were already multiple cotton manufacturing plants. It was believed that the industry will contribute hugely to the economy, creating thousands of jobs. However, the reality was quite the opposite. From 1960–2010, Nepal went through a lot of political turmoil that directly impacted the industry sector. When countries like Malaysia, Singapore, and Thailand were increasing their GDP by double digits (in %), Nepal was barely able to maintain the average GDP of 1.5% per annum. Due to a lot of bureaucratic hurdles, red tape, and corruption, the entrepreneurial mentality also shifted towards import rather than manufacture. The aftermath is a trade deficit of 800%.

The textile industry was no exception either. The political turmoil resulted in the trade unions heavily influenced by political parties for their benefit. The details can be read in the book — Death of an Industry by Mallika Shakya. In short, the textile industry was not able to grow as it was expected. To produce textiles, Nepal is blessed with a wide variation of climate. For example, silk can be produced in Pokhara and Syangja, whereas cotton can be grown in Terai and lower mid-hills. Hemp has been cultivated and supplied properly but the fabric is not suitable for a wide range of clothing.

The result is heavy dependency on India for the import of threads for manufacturing textiles. The annual import of thread in Nepal is around NRs 2 billion. In Nepal, the lack of industries and insufficient supply of quality fabrics has resulted in many garment industries importing fabrics from India, Bangladesh, and others countries. All the cotton threads, dye, and stitching needles needed for textile-like Dhaka are also imported from India. It is quite frustrating that our national fabric can only be manufactured if India is willing to export cotton threads to Nepal.

When we went to Palpa, many Dhaka producers talked about their dependency on the imported threads. In addition, the import of machine-made Dhaka from India and China has corrupted the market as those fake Dhaka were cheaper and less durable. These manufacturers use modern machine looms that easily produce Dhaka-like fabrics which have increased the scalability but the authenticity of Dhaka is getting lost. We also noticed a huge gap in digital literacy and eCommerce. These industries were still relying on traditional distribution channels with no digital marketing. If these gaps are not realized by the government, private sector, and public, authentic Dhaka cloth is sure to go extinct.

The preservation of Dhaka means the survival of our culture and origins. A few organizations like SABAH Nepal and Palpali Dhaka Association have been promoting Dhaka for more than a decade. SABAH Nepal, with an established network of more than 1100 home-based workers, has been promoting the essence of Dhaka, and other handmade fabrics for more than 20 years. Similarly, Palpali Dhaka Association has been manufacturing Dhaka and organizing training of handloom techniques for almost 60 years. There are many Dhaka industries in Tehrathum with similar contributions.

In the past couple of years, the general public has slowly started to adopt shopping made-in-Nepal products. This has also increased the prospect of Nepal-made fabrics like Dhaka. However, there is still so much we can do. The big question is: are the private sector or government willing to accept the modernizing of Dhaka? Aren’t the public as much responsible as entrepreneurs when it comes to promoting something?

The Dhaka manufacturers should also be willing to adapt to the modern economy where digital literacy and adaptability are a must for survival. They should start to expand their distribution channels to eCommerce model. By doing so, they can to the general public; especially youths. Also, Dhaka fabric should not be limited to topis, daura suruwal, etc. From patterns to designs, there should be a balance of traditional and modern design that will be suitable for all age groups.

The private sector should focus on technology for an efficient supply chain; also preserving the authenticity of the fabric. For the promotion, the fashion industry can play a major role to modernize Dhaka. This collaborative model will definitely take Dhaka to the heights it should reach. The increasing number of businesses and public sentiment has made me hopeful and motivated in the campaign to promote the only fabric of Nepal.

The global damage from dumped plastics and alternatives

Exploring prospects in the textile industry of Nepal